I delivered this panel today. This was commissioned to hide the buildings behind the garden. The home is part of an old converted school in North Devon. The customer watches the birds from the kitchen windows, so we continued that theme for her design.

Although this is a traditional leaded panel I have made the birds by fusing glass in the kiln and then I painted on their wings and put in the kiln a second time. The thistles and foliage have been painted onto the glass using lustre and come to life after dark when the light comes from the inside instead of from behind.

The customer is arranging for the panel to be fixed place , at a height to best obscure the buildings beyond the garden.

Stained glass windows are a bit like tattoos, once you get one you want more! I have just installed these two panels for a customer who I made two big panels for a couple of years ago. This happens surprisingly often, its great for me as I already know the customers and repeat customers are the best advert for my

These panels are fixed in front of the UPVC panels, I use this method regularly as most houses now have double glazing.
It was a wet and very dark morning, so the panels are brightening up a grey day, I will re photograph with the sunlight streaming through in the summer.

St Michael’s church is an iconic landmark on Teignmouth sea front (there has been a church on the site for over 1000 years) and the salt air has led the stone work around the stained glass to deteriorate quickly. So the church community raised money and were helped by the Heritage Lottery Fund to get the stonework and stained glass repaired.

Part of their grant was for community engagement and I am working with some of the town’s primary school students. They are learning about how to make stained glass windows and why churches have/had stained glass. They are then being invited to design a stained glass window conveying something important to them, or a message for the world. These designs will be exhibited in the church and then our will be chosen to be made into banners for the church to display and celebrate the restoration. The banners will be made by local craft group West Teignmouth Craft Club with help from the congregation.

Huge thanks to Mrs Gordon’s class at Our Lady of St Patrick RC School who were the first school to take part and they have made some wonderful designs. The children were very thoughtful and their designs cover many topics, with everything from WW2 to celebrate dead relatives to looking after our mental health.   I don’t know how we are going to choose 4 designs!

The next workshops are at  Teignmouth Community School, Mill Lane, cant wait to see what they create.

I have been working on three public commission War Memorials  over several years and this week saw all 3 of them launch; ahead of the Remembrance events on Sunday 11th November. I have found these commissions fascinating and it has been a poignant experience and I am honoured to be part of the centenary

In 2014, I was commissioned by Devon Remembers to work with Teignmouth Community School year 7’s to create a war memorial inspired by the experiences of the people on the Teignmouth Home Front (read about it here). I completed the piece a year ago, but it was moved from its usual home in the school reception, to Exeter Cathedral for the 100 year Centenary.

all of the members of the football team lost in combat over both world wars.

This was a fabulous piece to make as I got to combine the ‘old crafts’ of painting and leading with the modern fusing and photographic firing techniques. Roge Slater from the club made the frame and the work is back lit and on display at the Club.

l War Memorial was much closer to home. My colleague Sam Lock and I were approached by the Teignmouth Remembrance Committee  to create a fitting art installation for the centenary of W1. We decided on a make do and mend theme and invited people from Teignmouth and all over the country to join us in making fabric or woollen poppies.

The result was 30 metres of net covered in handmade poppies. When we had secured all the hundreds of poppies to the net I went up in the cherry picker and secured them to the top of the lighthouse.

Despite very heavy weather the memorial remains in place for Remembrance week and hopefully beyond. Thank you to all the hundreds of people who made poppies for us, from primary school children to octogenarians.

This has been a wonderful project and we are so grateful to the town for being so enthusiastic about the project.

Mixing history and art is when I am generally happiest and I have had such a great experience with the 180 students at TCS, the research team at Wealdstone and with my fellow towns people in our little seaside town. I just wish that humans could move beyond remembering the horrors of war to learning from these lessons of history.

Have you celebrated a major life event at St Michael the Archangel, Teignmouth? If so I need your help!!!

St Michael’s have kindly allowed myself and talented artist Rachael Bennett to exhibit our Devon Open Studios 2018 show  (8-22nd September) in the church and we are using the opportunity to make work in response to the history, architecture and landscape of this well loved landmark during the event.

For Open studios I am planning to create a large artwork on the social history of the church, so many Teignmouthian’s hav

e passed through the building, in Christening gown, wedding dress or onto their final resting place and I want to explore all the human history of the church during open studios.

My intention is to fire lots of photographic images of people’s christenings, marriages and funerals onto glass and make a stained glass celebrating the history of the church and it’s congregation.

BUT to make this work I need of photos!  I am asking everyone who has passed through the doors of the church to send me a copy of their favourite photos of these life events.

Did your grandparents get married there?

Did you get married there? 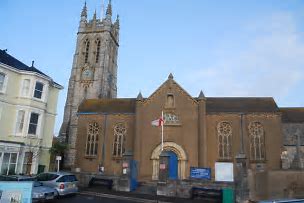 ld you like to remember a special person whose funeral was held there? Have you got photos in your family album that I could scan and add to the artwork?

I promise to use the images respectfully, to make a gorgeous glass panel celebrating our town’s social history. I intend to have a silent auction on the panel at the end of the event to raise funds for the church repair appeal.

If you already have a digital copy of a photograph you would like to share with me then please email me info@amyorangejuice.co.uk

Thank you in advance Amy McCarthy

ave just completed a public commission with Newton Abbot Museum. They are restoring and moving too the disused St Leonard’s Church in Newton Abbot town centre.

For the last 6 weeks I have commandeered the church, used it as a temporary studio, to teach 160 people various aspects of glass making. We have been creating small pieces of glass art to incorporate into the fabric of the new building. All the work has been made in response to the museum’s artefacts and image library. We have celebrated a wide selection of the museum collection. From Great Western Railway photo’s to the wooden, carved Tudor Sandford Orleigh Screen.

The site is in desperate need of the love it will soon receive, the restoration of the building begins soon, with National Heritage Lottery funding and once converted it will house the museum and the town council chambers. The building has significant stained glass by well known Victorian

artist Fredrick Drake, who also worked on Exeter Cathedral, various sites in Newton Abbot and St Michael’s in Teignmouth. St Leonard’s is also full of lovely carved details and the old organ pipes. It has been a real privilege to work in the building and be part of its future.

I worked with eight community groups in total. Wolborough Primary School, Coombshead Academy, University of the Third Age, Learn Devon, Newton Abbot Art Group, museum volunteers, council workers and local children. I also held 3 days for the general public. Between all these groups we have made tea cups and cakes for a Madge Mellor inspired mobile for the refreshment area and cast glass tiles to decorate the museum walls. We also made lots of painted, acid etched and photo transfer details inspired by the museum’s fantastic and varied collection; which I will incorporate into two, 3m tall panels to flank the main entrance of the building.

In the run up to the new museum building opening the Community Engagement Officer Kate Green will be running various workshops and interactive experiences to connect Newton Abbot citizens with their local museum. Look out for updates in the local press!

Here are some of the things we produced, more to come as soon!

This panel just got fitted into a lovely 1930’s house in Teignmouth today and it is a stylized view from the front of the house. The two reception rooms have been knocked through and this panel adds colour and a wow factor to the room. END_OF_DOCUMENT_TOKEN_TO_BE_REPLACED

Really enjoyed making these two large stained glass panels for a historic house in Teignmouth. The house already had a beautiful, large original stained glass windows. Some of which were skillfully painted in the high Victorian style. I took inspiration from details of these original windows and some inspiration from a Medieval  book of medicinal plants called ‘The New Herbal’ from the 1530’s (in Exeter Library Rare Book Collection) with its many woodcut images of plants.  END_OF_DOCUMENT_TOKEN_TO_BE_REPLACED

This large stained glass window has left for its new home today; it is an internal window between two rooms and has added a great feature to their renovation. The iridescent clear glass allows lots of light to flood into the other room and allowed me to use strong rich red, green and blue glass without compromising the light.  END_OF_DOCUMENT_TOKEN_TO_BE_REPLACED

This commission is destined for an internal window of a house overlooking Hay Tor on Dartmoor. It has lots of painted details, including a special gate, poppies and some of the ubiquitous Dartmoor ponies too!   END_OF_DOCUMENT_TOKEN_TO_BE_REPLACED